This item is in the following sections of the site:
Wahammer / Platic / Kit / Wahammer 40.000 / Wargame / Tyranids / Broodlord 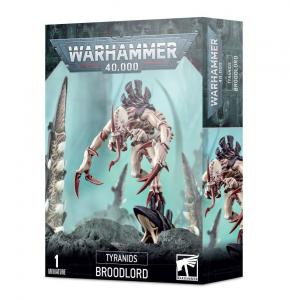 The Trygon is a colossal serpentine creature whose iron-hard carapace is proof against all but the heaviest of weapons and whose giant talons can scythe through even the most formidable battle-tank. In battle, a Trygon's shifting mass generates lethal bio-electric energy that it unleashes upon its foes in vicious arcs of lighting.

Mawlocs are huge worm-like creatures with massive razor-toothed maws that act as the entryway to their equally cavernous gullets. Most of a Mawloc's victims are swallowed whole, there to be painfully digested. Anything to large to swallow is pounded flat by the Mawloc's muscular tail before being devoured.

This box set contains one large multi-part plastic miniature that can be assembled as either a Tyranid Trygon or Tyranid Mawloc. This 97-piece set contains a range of additional components that allow you to personalise your model. Model supplied with a large oval base.