This item is in the following sections of the site:
Boardgames / Political games / Diplomacy (eng) 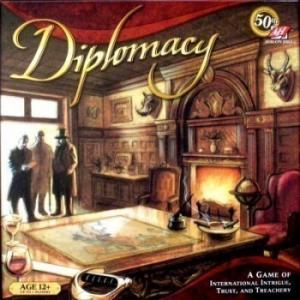 This classic game of pure negotiation has taken many forms over the years. The original Avalon Hill version has perhaps the widest release, but Avalon Hill (Hasbro) re-released the game in 1999, complete with a colorful new map and metal pieces. They recently released a 50th anniversary edition with includes a new map and cardboard pieces representing the armies and navies which is now in print. In the game, players represent one of several European countries (France, Germany, Austria-Hungary, etc.) at about the time of World War I. There are only two kinds of units: sea and land. On a turn, each of your pieces has very few options: move into an adjoining territory or help another unit move into or defend an adjoining territory. With its incredibly simplistic movement mechanics fused to a significant negotiation element, this system is highly respected by many a gamer.