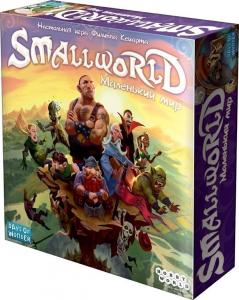 Each player begins the game by selecting one of several available combinations that are are created randomly. Each combination is defined by two tokens, one representing the race and the other an additional special ability or special scoring opportunity.
The player then makes use of the race tokens to capture territory on one of 4 different playing maps. Map selection is determined by the number of players with a specific map used for 2, 3, 4 or 5 players. Territory capture is done in a diceless manner. To capture a territory, a player must place a particular number of tokens in it, based on the location of the territory, the number of defending tokens, and any special abilities of the player's civilization. If the player can place a sufficient number of tokens, the capture is guaranteed to succeed; if they cannot, the move is illegal. If enemy tokens are defeated in a captured territory, one of them is removed from the game entirely and the remainder are returned to the owning player to replace in their own territories. At the end of each turn, a player scores points based on the number of territories they own, with some civilization abilities providing bonuses.
Since the number of tokens in a civilization is (usually) fixed, and can only go down as other civilizations capture territories, eventually a civilization will reach a maximum number of territories that it can support. When this occurs, the player owning that civilization can declare that it is going into decline. This allows the player to select a new civilization and bring that onto the board while the pawns of the former civilization remain in place, no longer movable but continuing to gather points until their territories are captured.
The game continues until a certain number of turns are completed, whereupon the player with the highest score wins.