This item is in the following sections of the site:
MTG / Single / Десятая основная редакция / Avatar of Might 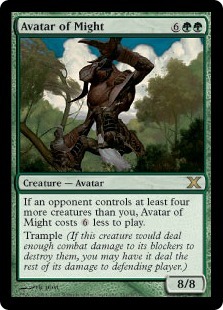 If an opponent controls at least four more creatures than you, Avatar of Might costs

Trample (If this creature would deal enough damage to its blockers to destroy them, you may have it deal the rest of its damage to defending player or planeswalker.)

In their most desperate hour, the elves of Llanowar had one song left to sing.
Rare
Green