This item is in the following sections of the site:
Wahammer / Platic / Wargame / Ogres / Ogre Kingdoms Mournfang Cavalry 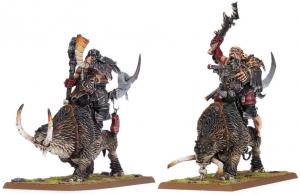 High up the slopes of the Mountains of Mourn lives a cave-dwelling beast that has always attracted the attention of the Ogres - the Mournfang. Ogres have tried to capture and break these beasts for mounts since they first encountered them and finally, after many centuries of failed attempts, they succeeded. Powered by thick haunches, Mournfangs surge towards the foe at a speed faster than their muscle-bulked frames would suggest, not slowed in the least by the large Ogre or saddle atop its hairy back. When they do smash into an enemy, the powerful Mournfangs chomp, slash and stamp the foe whilst the Ogres lay about them, swinging ponderous clubs to bludgeon them to death. The results are devastating, with the fallen not just slain, but utterly pulverised, pounded into the bloody ground by a profusion of heavy blows.

This multi-part plastic kit contains 85 components with which to build two Ogre Kingdoms Mournfang Cavalry. This set is supplied with plenty of extra components to personalise your unit, including a brace of Ogre-sized pistols for the Unit Champion and enough parts to make a Standard Bearer and a Musician. These models are supplied with a 50x100mm monster base. These miniatures are supplied unpainted and require assembly - we recommend using Citadel Plastic Glue and Citadel Paints.