This item is in the following sections of the site:
Wahammer / Platic / Kit / Wahammer 40.000 / Fantasy Battles / Wargame / Chaos Daemons / Flamers Of Tzeentch 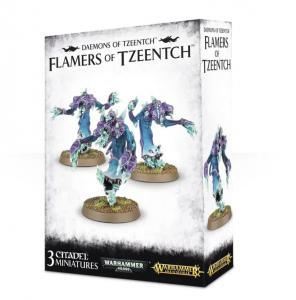 Flamers of Tzeentch are Daemons that use burning limbs to hurl bolts of yellow and blue magical flame at their foes. This magical fire of Tzeeentch burns not only flesh but reality itself, and its caress can shatter the senses as completely as it chars and burns the body. The Flamers are no less deadly in close combat, where they can use their pyrotechnic powers to burn through armour, flesh and bone with ease.

The Flamers of Tzeentch are unusual-looking miniatures, even for Daemons. At the core of their hunched, multi-headed forms is a muscular torso that transitions into flickering flames at the extremities. Teeth are not merely limited to their heads. In fact, vicious teeth can also be found on appendages at the end of their arms and flaring out from where one might reasonably expect there to be legs. These are perhaps useful to chomp on any of their foes which haven't yet been burned to death.

This multi-part plastic boxed set contains 36 components, three 25mm square bases and a sprue of four 25mm round bases, with which to build three Flamers of Tzeentch. This kit is supplied unpainted and requires assembly - we recommend using Citadel Plastic Glue and Citadel Paints.

You can use this kit for collections of both Warhammer and Warhammer 40,000 miniatures.